There will be lizards! 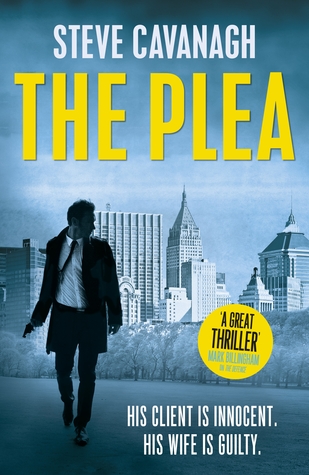 The Plea by Steve Cavanagh

When David Child, a major client of a corrupt New York law firm, is arrested for murder, the FBI ask con-artist-turned-lawyer Eddie Flynn to secure Child as his client and force him to testify against the firm.
Eddie’s not a man to be coerced into representing a guilty client, but the FBI have incriminating files on Eddie’s wife, and if Eddie won’t play ball, she’ll pay the price.
When Eddie meets Child he’s convinced the man is innocent, despite overwhelming evidence to the contrary. With the FBI putting pressure on him to secure the plea, Eddie must find a way to prove Child’s innocence while keeping his wife out of danger – not just from the FBI, but from the firm itself.

After reading the first book featuring Eddie Flynn, the action lawyer, I noted it was a bit over the top, but nevertheless entertaining. In addition to delicious courtroom scenes, one can safely expect some explosion, car chases, shootings and other similar stuff that gets one’s blood pressure going in the morning.

The premise is quite similar to the first book, but instead of taking Eddie’s daughter they are now threatening his wife with a life in prison for witnessing some dodgy documents. (Note to self: check if one can be held accountable for shit like that in the UK, ‘cuz if yes, I’m not going to witness anything for anyone. Ever.) Unknowingly, mind you, but nobody cares. Thankfully, Eddie made some friends in the FBI during his previous case, so that surely makes things more interesting. Also the case against David is almost like a locked room mystery, and I’m quite fond of those.

Eddie, the con man turned lawyer is essentially a good guy, and he genuinely wants to help his new client, even though to save his wife, all he would need to do is throw the dude under the bus.

Another theme carried over from the previous instalment is Eddie wanting to get back with his wife. Why that is, I don’t know, because the woman takes every opportunity to blame him and assume everything is his fault. Kind of reminded me of my ex, and let me tell you, it’s mildly infuriating. Oh, something went wrong? Why, what did you do? But I suppose it just emphasises Eddie’s “nice-guyness”.

The action scenes were pretty intense, the courtroom scenes quite witty, and the pace fast as lightning. It’s not one of those stories that makes think or reflect about stuff, or goes very deep into human nature, but sometimes I think my brain just needs this sort of distraction.