Six friends. One killer. Who do you trust?

Six friends go down to the woods.

But one never comes home.

She Lies in Wait by Gytha Lodge

On a scorching July night in 1983, a group of teenagers goes camping in the forest. Bright and brilliant, they are destined for great things, and the youngest of the group—Aurora Jackson—is delighted to be allowed to tag along. The evening starts like any other—they drink, they dance, they fight, they kiss. Some of them slip off into the woods in pairs, others are left jealous and heartbroken. But by morning, Aurora has disappeared. Her friends claim that she was safe the last time they saw her, right before she went to sleep. An exhaustive investigation is launched, but no trace of the teenager is ever found.
Thirty years later, Aurora’s body is unearthed in a hideaway that only the six friends knew about, and Jonah Sheens is put in charge of solving the long-cold case. Back in 1983, as a young cop in their small town, he had known the teenagers—including Aurora—personally, even before taking part in the search. Now he’s determined to finally get to the truth of what happened that night. Sheens’s investigation brings the members of the camping party back to the forest, where they will be confronted once again with the events that left one of them dead, and all of them profoundly changed forever.

I have a soft spot for stories that run on parallel timelines. When it comes to murder mysteries, seeing how the events unfold in the past gives an additional layer to the narrative.

From the moment Aurora’s body was found, the chapters alternated between the present, and that fateful day in 1983 when the young girl met a gruesome end.

She Lies In Wait is heavily focusing on the investigation and police procedures. The team, lead by DCI Jonah Sheens are a bunch of diligent detectives, and their personalities and skills complemented each other brilliantly. Above it all, they are all real people with real problems, from stalking exes to ailing mothers, they have their fair share of worries.

Jonah Sheens feels personally involved in Aurora’s case; he and the six teenagers who were with the missing girl all went to the same school, attended the same parties back then. This could easily cloud anyone’s judgement, but not Jonah’s. Even though there are things in his past that may come and bite him in the ass, he doesn’t shy away from digging deeper and deeper.

The six teenagers, including Aurora’s sister Topaz (great name btw), are all in their forties now. You’d think after a drug fuelled party they will surely not remember a thing, but memory is a funny thing. As Jonah slowly teases out more and more details, their allegiances shift, and soon fingers starting to point in different directions.

This book is not a fast paced page turner. It’s more like a puzzle with its tiny pieces scattered all around in time and space. A slow burning, layered story about grief, loss, and people who use their skills and wit to solve a seemingly unsolvable case.

Who is Gytha Lodge? 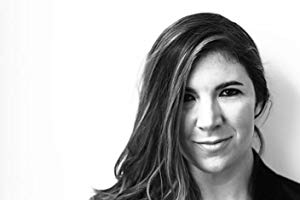 Gytha Lodge is a multi-award-winning playwright, novelist and writer for video games and screen. She is also a single parent who blogs about the ridiculousness of bringing up a mega-nerd small boy.

She has a profound addiction to tea, crosswords and awful puns. When not writing, she heads up a copywriting team at a global translation firm, where she generally tries to keep all the video-game writing to herself.

She studied English at Cambridge, where she became known quite quickly for her brand of twisty, dark yet entertaining drama. She later took the Creative Writing MA at UEA.

She has signed with Penguin Random House worldwide for the first three books in her crime series featuring DCI Jonah Sheens. She Lies in Wait will be released in January 2019.

Thank you Jenny Platt from Michael St Joseph’s for inviting me to the blog tour!