An anxiety inducing race through a multiverse, Dark Matter is not the sort of book you curl up with for a quiet evening. 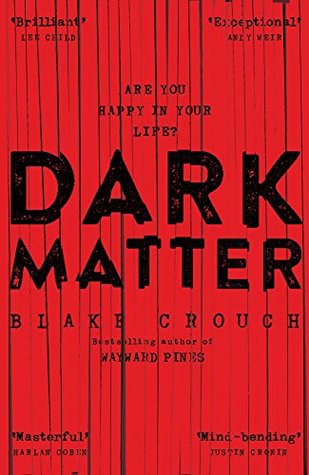 ‘Are you happy in your life?’
Those are the last words Jason Dessen hears before the masked abductor knocks him unconscious.
Before he wakes to find himself strapped to a gurney, surrounded by strangers in hazmat suits.
Before the man he’s never met smiles down at him and says, ‘Welcome back, my friend.’
In this world he’s woken up to, Jason’s life is not the one he knows. His wife is not his wife. His son was never born. And Jason is not an ordinary college physics professor, but a celebrated genius who has achieved something remarkable. Something impossible.
Is it this world or the other that’s the dream? And even if the home he remembers is real, how can Jason possibly make it back to the family he loves? The answers lie in a journey more wondrous and horrifying than anything he could’ve imagined – one that will force him to confront the darkest parts of himself even as he battles a terrifying, seemingly unbeatable foe.

I can’t say I’m particularly well versed in quantum theory, and it’s just as well, because the more I know about it, the more I worry. Dark matter and parallel universes sound fascinating, and sure as hell are intriguing in theory, but if travelling through different versions of our world actually becomes a thing, I don’t want to be there.Thanks, but no, thanks.

I haven’t felt this sort of constant worry while reading a book for quite a long time. My mind kept racing through scenarios about how Jason’s adventure will go wrong in hundreds of ways. You see, even though travelling through the multiverse is not the same as time travelling, our parallel worlds can still be very different. What if they get trapped? What if their currency is completely useless where they get to? What if they run out of money? My mind just simply couldn’t comprehend the sheer horror of being stuck somewhere so familiar, yet completely alien.

The story starts out innocently enough, but soon enough the pace picks up, and we are being hurled from one danger to another at an incredibly high speed. Ain’t no rest for the wicked, and all that.

“We live in a state of decoherence, in one reality, because we’re constantly observing our environment and collapsing our own wave function.”

Even though this story is heavy on theories, ideas and suspense, Blake Crouch also managed to paint an incredibly vivid picture of all the worlds Jason ended up in.

A highly addictive sci-fi thriller, Dark Matter is not for the faint hearted.