So clever, so delicious! 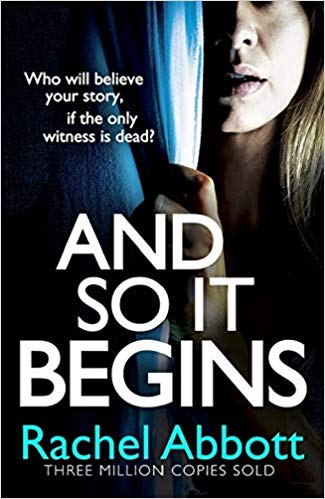 And So It Begins by Rachel Abbott

So this is how it ends. It is clear to me now: one of us has to die.
Mark and Evie had a whirlwind romance. Evie brought Mark back to life after the sudden death of his first wife. Cleo, Mark’s sister, knows she should be happy for him. But Cleo doesn’t trust Evie…
When Evie starts having accidents at home, her friends grow concerned. Could Mark be causing her injuries? Called out to their cliff-top house one night, Sergeant Stephanie King finds two bodies entangled on blood-drenched sheets.
Where does murder begin? When the knife is raised to strike, or before, at the first thought of violence? As Evie stands trial, the jury is forced to consider – is there ever a proper defence for murder?

And So It Begins is a chilling and twisty story of a marriage gone wrong, and a gruesome murder leading to a trial that could set an example and provide hope for domestic abuse victims.

Evie is either the clumsiest woman in the universe, or there’s something sinister going on behind closed doors. She claims her marriage with Mark is just fine, and basically nothing to see here. So when the dude ends up dead in a puddle of his own blood in the bedroom of his own oh-so-oppressive cliff house, eyebrows are raised.

Mark’s sister Cleo wants to see Evie behind bars for murder, while a well known lawyer and women’s rights supporter wants to use this case to get public attention and help other women get the courage to come forward and get their justice. It was quite emotional, and frankly, I couldn’t help but sympathize with Cleo, even though she did come across a bit of an asshole from time to time. Her relationship with her brother was a tad bit questionable though. In the “bloody hell, lady, what’s wrong with you? Obsessed much?” sort of way.

Part domestic thriller, part courtroom drama, this story has something to offer for the fans of both genre. Rachel Abbott had me guessing about a lot of things. Who did what? Why? It was crazy!

Sergeant Stephanie King, while not the main focus of the book also had her own story line, and it was nothing short of heartbreaking. How she still managed to function and do her job properly, I don’t know, but I want to be just half as cool as she is!

The shocking twist at the end was a bit overshadowed by the theatrical events that took place, and I’m not particularly fond of characters launching into dramatic monologues either, but the rest of the story was so good, that it didn’t bother me too much. I’ve read the DCI Tom Douglas series by Rachel Abbott (which is awesome by the way), and I don’t recall anyone behaving like a Shakespearean villain in those.

Although this seems to be a standalone, I wouldn’t mind seeing Sergeant King again!

Have you read this or anything else by Rachel Abbott? What did you think?

I’ve received a copy of this book from the publisher via NetGalley in exchange for an honest opinion.