The murder of a ruthless lawyer, a chilling mystery and constant rain casts gloomy shadows over the small town of Linkoping. 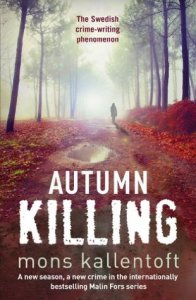 It is Autumn in Linköping and the heavens have opened, but not even these biblical rains can wash away the blood of crimes past and present.
Then the brutally-stabbed body of self-made Internet billionaire Jerry Petersson is discovered floating facedown in the moat surrounding his home, the imposing Skogså Castle.
Malin Fors, the brilliant but flawed star of the Linköping police force, is already struggling to keep her life together. Now, as the Petersson case forces Malin to delve deep into Linköping’s history and her own family’s past, the secrets she uncovers threaten to drown her, too . . .

Although Summer Death ended on a hopeful note, it seems Malin’s rekindled relationship with her ex-husband, Janne, could not stand a chance.

Malin, Janne thinks. It’s lonely out here in the forest without you, but these old wooden walls can’t contain the pair of us.

The constant battle against her addiction seems to be already lost. Hanging onto the last remnants of her sanity, Malin throws herself into the case with everything she’s got. But is it enough?

Malin is not the only one with personal struggles. The death of a spouse, a not so secret affair, a divorce. The fragmented narrative pairs well with the everyday drama affecting the lives of the other detectives.

There’s a great mystery surrounding Jerry Petersson’s case of course, and the police have to go through quite a few twists and turns to get to the bottom of the gruesome murder in this dark and atmospheric story. The dead is not quiet, as we are used to it by now, and through his chilling voice, he reveals tragic events from the past, with life changing consequences and artful conspiracies. But do any of those have anything to do with his death?

The number of suspects are plenty, and Malin is seriously losing the plot. Drowining in tequila, but refusing to admit she has a problem. Will she jeopardize the case?

A slow burning thriller, Autumn Killing will hit you right in the feels.