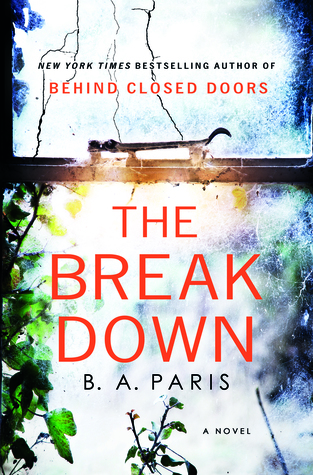 Cass is having a hard time since the night she saw the car in the woods, on the winding rural road, in the middle of a downpour, with the woman sitting inside—the woman who was killed. She’s been trying to put the crime out of her mind; what could she have done, really? It’s a dangerous road to be on in the middle of a storm. Her husband would be furious if he knew she’d broken her promise not to take that shortcut home. And she probably would only have been hurt herself if she’d stopped.
But since then, she’s been forgetting every little thing: where she left the car, if she took her pills, the alarm code, why she ordered a pram when she doesn’t have a baby.
The only thing she can’t forget is that woman, the woman she might have saved, and the terrible nagging guilt.
Or the silent calls she’s receiving, or the feeling that someone’s watching her…

This was quite an addictive page turner from B. A. Paris. There was no dawdling around in this fast paced story, and I appreciate that.

The mental breakdown of Cassie started out with what seemed to be just some everyday forgetfulness due to stress. But her mental state quickly started going downhill after the woman she saw stranded on a stormy night turned up dead and other weird shit started happening to her soon after. Cassie’s mother was diagnosed with early onset dementia, and she obviously started to fear the worst. With mental illness looming in the background the tension quickly builds to seriously suffocating levels.

The answer to the question “Who’s fucking with Cassie?” was somewhat predictable, but to me it just added an interesting layer to the story. Seeing the why and the how unfold was quite entertaining on its own, even if some stuff was somewhat far fetched.

Although Cassie reached a seriously paranoid state towards the end, once everything was revealed, she was surprisingly chill. How? I mean, seriously?

Quick read, and certainly right up my alley.